I took a few pictures on the 401 leaving Essex County this morning after a short visit with my folks and grandmother.

All economies are planned. The differences lie in who is allowed to participate in the planning, and for what purpose. There are quite a few people who would benefit greatly from a plutocracy, and who are sinking clownish amounts of resources into convincing everyone else, through well-honed propaganda, that they will all somehow benefit from a system that funnels ever-greater amounts of political and economic influence into the hands of those whose main skill is convincing people to believe absurdities.

Ayn Rand's rock-ribbed capitalist vanguard will prove to be as toxic and damaging as the communist vanguards of last century, because they are not better people, merely more capable of manipulating the societies in which they live for their own benefit. Mitt Romney is the personification of what Rand's utopian ideology leads to - predatory sociopaths ruining the lives of millions out of a belief in their own superiority, based upon their ability to manipulate finances in their own favour. Vanguards of self-professed übermenschen ultimately demonstrate their all-too-human fallibility, and the rest of us are left to repair the damage.

In response to an article about a controversy surrounding an art installation at the University of Wyoming, I typed out the following thoughts on our reliance upon long-dead plants for pretty much everything. I'm reposting them here because, well, I can.

We have 300 years, 500 at the outside, before our fossil hydrocarbon supplies are effectively exhausted. We rely on them for fuel, materials, and fertilizer. They took tens of millions of years to develop. We'll have them drained in less than ten thousand years, the majority used in less than a thousand. Their overuse is likely causing noticeable climatic changes at a much faster rate than even we can adapt to, never mind the other multicellular organisms we live among and consume. Barring sudden extinction, we're going to be around after the coal and oil are gone.

What are we going to do? Is anyone thinking that far ahead?

Easy way to check my rough estimate: locate info on the estimated available volume of current oil/coal sources and their extraction rate. Calculate the time to exhaustion. Allow an extra 50% increase in that extraction rate, and 1.5 - 2x the known volume (there may be more than known at first). Run those numbers as well.

When I did that for the Alberta tarsands, exhaustion came in between 300-500 years. The Ghawar field in Saudi Arabia will likely be done in the next hundred (it could run dry tomorrow; the Saudi government treats its estimates and facts as state secrets). The coal will be extracted just as quickly, even in places that have tried to stop its use, as long as we are still reliant on fossil carbon supplies for so much. Even allowing for massive, global increases in use efficiency (good luck as long as short-term financial profit is the primary motive for extraction and use) and a doubling of accessible sources, we have no more than a thousand years before we're stuck with what has been extracted. Sooner or later, we have to close as many of our resource cycles as possible. The only energy sources we can be reasonably sure will continue operating are the thermonuclear fusion reactor we orbit, and to a lesser extent the gravitationally-driven tidal forces and geothermal output. As for materials, we rely so heavily on plastics made from fossil carbon supplies that exhaustion would instantly force us to recycle and reprocess that which we toss away now as waste, and come up with methods to grow fresh sources (at which point we have to balance that with our food & water supplies). First person to say "b-b-but extraterrestrial resources!" gets to figure out how to obtain them using what we have available, and how those activities will affect the place we all, for now, still have to live on.

Barring extinction, we're going to be here a long, long time. We can try to plan ahead and think really long thoughts now, or we can just keep putting it off with procrastinative excuses like "someone will develop technology" or "the market will take care of it". There's an inherent assumption underlying those statements that our descendants won't excuse us for making if we turn out to be wrong. They might forgive us; they'll at least be stuck accepting what situation they're born into and doing what they can, but all the rationalizations we make now are choices that they will have to deal with the consequences of, and they'll judge us by what we leave for them.

For people near me in southern Ontario, the following sites may be worth paying attention to over the next few days:

Today at work, I watched a 2010 interview with Afghan badass Malalai Joya conducted by Peter Mansbridge.

Mansbridge repeatedly cut off her responses to his often presumptuous and patronizing questions. While she does have a tendency to speak quickly and without breaks when speaking in English, his interruptions were rude and dismissive, and I thought it was unnecessary to include them in the aired interview.

The final insult, however, took place when she started to speak while he was asking a question. He cut her off saying "let me finish." After cutting her off multiple times and trying to minimize or dismiss the message she's been trying to communicate to the rest of the world for a decade, after interrupting her and treating her like a silly annoyance (much like the warlords she faces down and speaks out against on a regular basis), he had the nerve to assert his sole right to finish a sentence.

The interview was a microcosm of everything wrong in major media, and the society from which it emerges.

Incidentally, the video of the speech that triggered her ejection from the post-invasion constitutional assembly is worth a view to watch her unload on the misogynist murderers who filled the post-invasion power vacuum. It's an interesting juxtaposition, seeing her dismissed and belittled in different ways by men on opposite sides of the world.

And the Fucking Piece of Shit That Walks Award for today goes to... Todd Akin! Come on down, misogynist lying fuck, and claim your prize! 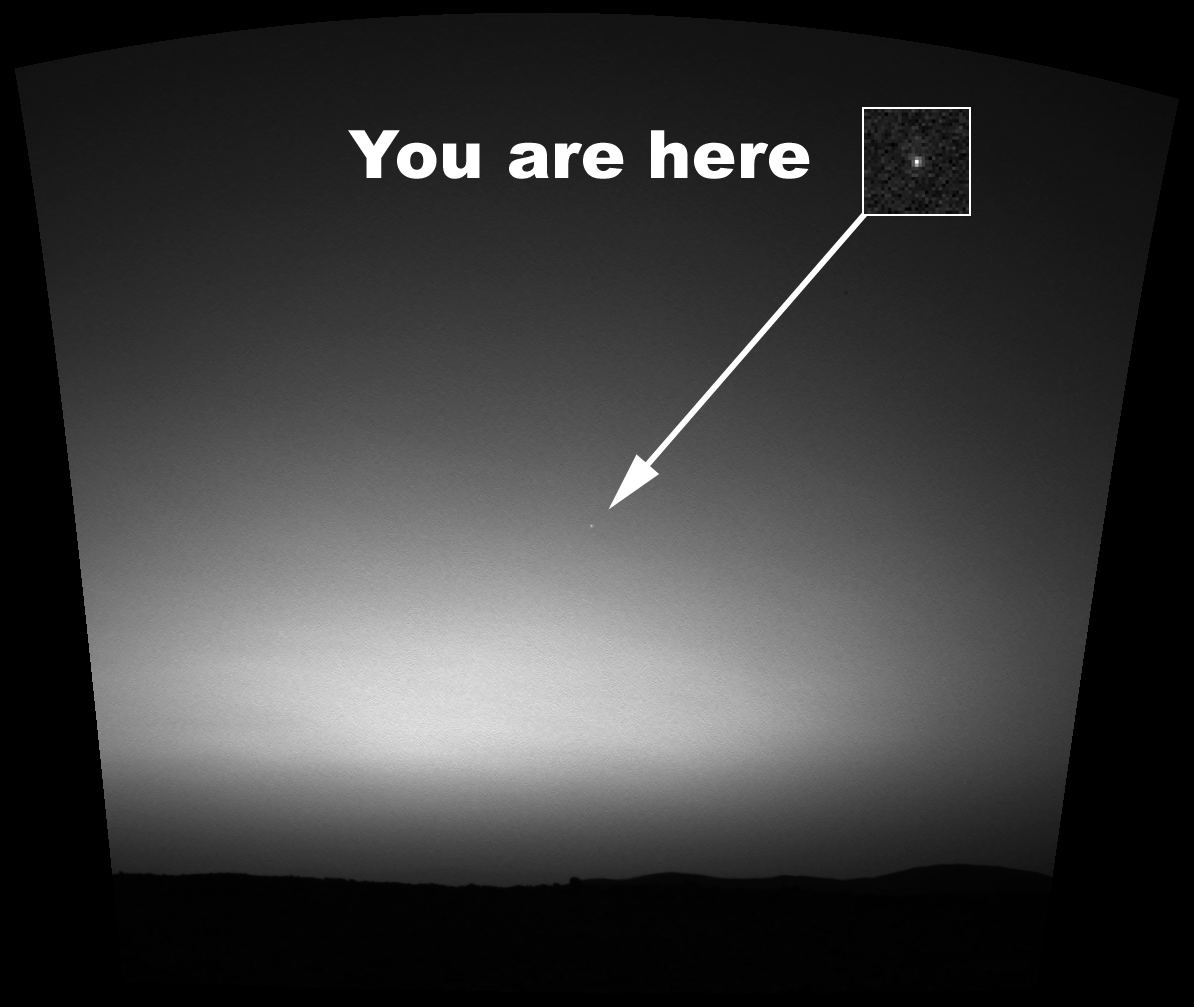 Actually, that might not be true, depending upon Earth's orientation relative to Mars at the time the image was captured.

I have to admit, this is a pretty neat interaction. Hot-shit science and engineering whizzes answer questions from adoring nerdy fans and, well, the curious.

I hope we can figure out some way to preserve these findings and achievements in such a way that future generations, even other intelligent species that may evolve here in the next several million years, will know that we at least did some positive things. If we find a way to obliterate ourselves, or otherwise leave obvious signs of anthropogenic cataclysm in the biological and geological records, they can at least learn from our mistakes, though I dream of somehow leaving them some useful information about the basic structure of reality[0].

Nothing lasts forever; I just want to go out knowing I, and we, had some positive influence upon the world we live on.

[0] It might prove fruitless, but we won't have a chance of being successful if we don't somehow try.

Vladimir Putin's fascist regime sentenced three members of feminist punk outfit Pussy Riot to two years of prison labour for performing about fifty seconds of a protest song in a Moscow church. The charge of "hooliganism motivated by religious hatred" resulted in a sham of a trial that featured victim statements from people who hadn't even viewed video of the performance, affadavits from people featuring the same sentences - complete with identical misspellings - and claims that feminism is a sin.

Naturally, a lot of people have been rather unhappy with this series of events, and since I've always wanted to stick a metaphorical thumb in the proverbial eye of Sauron Putin, I decided to join the throng.

In conclusion, fuck Vladimir Putin and his army of lackeys in the state, corporations, and church. Blasphemy is a right, not a crime.

The first five pages of Carl Sagan's The Demon-Haunted World continue to be an indictment of our contentless, contextless mass media. First published seventeen years ago, the text of those few early pages reads as if it could have been written after a recent weekend of watching Olympics coverage, celebrity "news", and whatever schlock TLC, A&E, and Syfy (Space here in Canuckistan) are airing these days. Change the medium to radio or print, over-the-air or online, electronic or dead-tree, and the same perverse incentive to deceive for profit continues to benefit charlatans and confidence tricksters who cloak their empty promises and falsifications under a veneer of hidden knowledge and curiously uncited research. When the controllers of various media decide that prioritizing honesty and factual information is not worth a possible loss of profit, when media operations actively seek licence to lie and mislead, the result is a gravely ill-informed populace forming opinions about every topic based upon bad data. The resulting conclusions will be incorrect, and the subsequent decisions will likely be somewhere between merely wrong and destructively dangerous.

I've only reached page 14, and already wonder why some crusading teachers haven't slipped it into high school curriculums. ETA: Media literacy and critical thinking should be required subjects for teenage students, along with basic resource management (call it "financial education" until we transition away from capitalism). It might even be possible to insert simple lessons about logic and rational thinking into primary education; it's certainly desirable. Learning how to think is more important than being taught what to think. The latter should be a consequence of proper application of the former process. Fallibility, complexity, and Heisenberg ensure that no one can be perfectly rational, informed, and correct, so we'll still produce bad solutions to incorrectly-analyzed problems, but communicating reality-based mental processes will at least give future generations a better chance of adapting to or even preventing whatever rotten disasters, external or human-created, may befall them.

I was also surprised to learn that Margaret Fucking Thatcher was a chemist who studied under a Nobel laureate.

realinterrobang) from yesterday, but the prez might actually be enjoying himself there based on the giant smile on his face. It's the same look he had when meeting Nichelle Nichols.